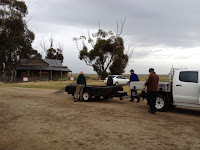 The Friends of Terrick Terrick National Park held their annual Open Weekend of the park on the 5th-7th of October. The weekend was part of the 2012 Naturally Loddon Festival.
Over 40 people attended the weekend at various stages, with some new memberships among the members renewing theirs again for 2012-2013. 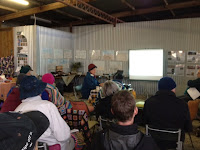 Based at the historic Davies Homestead, attendees were treated to various talks on the Friday evening, including Helen Stevens local history presentation.
Weekend activities included the removal of old animal exclusion plots and fallen fences, weeding around the meeting complex, preparing tree guards to be installed later this month, and seedlings planted last year were checked for their progress.

A total of 27mm of rain fell over the weekend, which resulted in the program being slightly modified from expected and may have kept attendance down. However the weekend was still a success despite the damp weather!
Congratulations to the Friends of Terrick Terrick National Park committee and volunteers who put a tremendous amount of effort into organising the event each year.
Photos by Jill Millsom: Retrieving animal exclusion plots (top), Helen Stevens local history talk (middle), wildflower display (bottom).