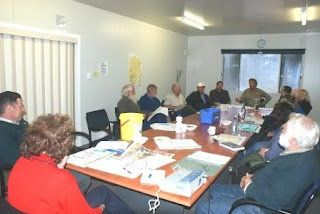 The Wedderburn CMN planning day was held this year at Parks Victoria Inglewood on the 15th of October with seventeen people attending. Alison Jeavons chaired the meeting as we first went through highlights of the year followed by a discussion of our annual review document and our DSE Service Agreement. The main topics under consideration were those associated with:

Environmental Threats /Issues and the WCMN’s Responses to these perceived threats such as pest animals and plants, the fragmentation of habitat, the degradation of habitat, protection of threatened species and monitoring of changes. Responses to threats included such aspects as habitat building, habitat expansion, creation of biolinks, fox control, spraying of weeds etc

Education and Involvement of the General Community such as presentations, bustrips, newsletters, newspaper articles and websites etc

Administration Aspects of the CMN such as networking, funding and governance etc.

High on the priority list was the management of the $577,000 which the WCMN has obtained over a three year period from the Federal Government’s Caring for our Country scheme for use in our Box – Gum Grassy Woodlands Project which was mentioned in the last newsletter. After much discussion we all headed off for a pub lunch at one of the local pubs before returning to more discussion which was periodically interrupted by water leaking through the roof of the Parks Vic building onto the table – hence the assortment of buckets and various other containers seen in the photograph. Overall, the day was a productive one.