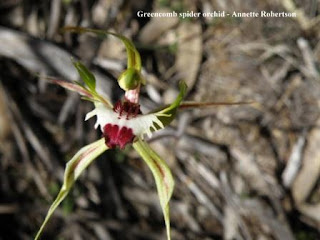 The group arrived at Dimboola for lunch after a wet trip through Minyip and the endless plains of a variety of well growing crops.
The Starricks’ farm at Marango was our stop for the afternoon; they run Boer goats on the river flats. The river was running for the first time in five years and the district’s spirits were high.
The Starricks are part of a ‘salt busters’ group who are planting salt bush in salt pans denied natural drainage due to farm dam and road construction. The weather was too wet for a farm tour; their tree planting trailer was inspected and much was learned from this inspiring couple.
At the river we saw Rusty Hood Orchids and other wildflowers. Tea was had at the Union Hotel with Trevor Barker and the Starricks.
Wednesday saw us on the Jeparit Road to inspect a farm which was being replanted with local species, and to hear a member of the Landcare group talk about their work around Nhill.
Next, a short stop at Jeparit to see Lake Hindmarsh; the river had just reached the southern end.
At Rainbow for lunch then back to Lake Hindmarsh to see the overflow and the wildflowers there.
West to Hermans Hill for a 3km hike. The hill is all sand which supports a large variety of wildflowers, shrubs and mallee. The view from the top was extensive.
West again to a property north of Yanac; here the owner had planted the sand dunes with local native vegetation, some by direct seeding or with a team of tree planters. The flat ground between the dunes had good grass cover.
We met Brett Wheatley near Boyeo, who spoke to us about the Nhill Landcare Group and their annual tree planting project. Each year 200 people, mainly from Melbourne, converge at the Little Desert Lodge where they are accommodated, fed and sent out in teams to revegetate the district,working on the 141 Biolink project, to link the Big and Little Deserts. Other groups are linking on to the Murray River and on to Broken Hill. The roadsides, some five chains wide, are being revegetated as well as some private land.
Brett, the Mayor and the Nhill Landcare President joined us for tea at the lodge, and after speeches joined us for a spotlighting tour to see owls, bandicoots, betongs, possums, gliders and stone curlews.
Thursday morning we had a tour and talk about the mallee fowl breeding programme.
After thanking Trevor for a great tour we returned to Dimboola to meet with a “greenie’, Brian Head, who though not being a member of Landcare, has a great love of the environment. He has set aside 40 acres for natural regeneration. The block had been a nine-hole golf course and a place for paddock driving before he set it aside in 1968. The block has large old trees, shrubs and a diverse ground cover. hundreds of greencomb spider orchids were seen as well as onion orchids, lilies, dianellas and peas.
A late lunch at Horsham and back home via St. Arnaud passing huge crops of wheat, barley, oats, beans, peas and lentils.

Thank you Jean and Trevor for organising a great trip, and Bruce for safe driving.