Skip to content
Ten o’clock in the morning of the 24th of November at Northern United Forestry Group’s (NUFG) Kamarooka Project site on the Hay family farm saw the beginning of an information day when representatives from the Norman Wettenhall Foundation (NWF) met with the executive committee of the Loddon Plains Landcare Network. The committee’s objectives for the information day were to:
· Showcase Landcare in the Loddon region to the NWF
· Demonstrate a cohesive approach to community participation in landscape-scale change, habitat protection and enhancement, and sustainable agricultural production across the network’s area
· Provide the NWF with a sample of the diversity of people and projects that make up the network
· Seek a partnership with NWF and ultimately funding to develop a strategic plan for the network and the area that we cover.
The group toured the site with Ian Rankin, NUFG President, and hydrogeologist Phil Dyson. The 50-hectare site had been a barren piece of land besieged by salinity problems since the 1950s. But the revegetation efforts of the NUFG have transformed it into a green oasis. Important and informative scientific research into salinity management, the watertable response to different revegetation treatments and the physiological responses of trees to stress is ongoing at the site.After leaving Kamarooka the group travelled to view a North Central Landcare Group project ‘The Greening of the Myers Creek’, part of which is in progress on Colin Koch’s farm at Campbell’s Forest. Colin described how he had fenced off the length of creek on his property to prevent grazing and then proceeded to revegetate the area. Penny Wall, who had coordinated this project, took the opportunity to inform the visitors of her efforts in setting up a junior landcare group with students from the East Loddon P-12 College. 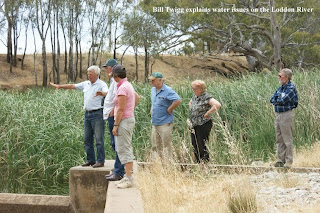 Lunch was appreciated and enjoyed on the banks of the Loddon River at Bill Twigg’s Elmswood property. Bill, a passionate land carer talked of his love of trees and the beauty of the river but added that the peaceful scene that we were enjoying was in fact the result of planning and revegetation that had been carried out inprevious years and was still ongoing. He also commented on the favourable shade effects that this work had had on his lamb breeding programme.

Colleen Condcliffe, of Salisbury West Landcare Group, agreeing wholeheartedly with Bill’s strategy, described the efforts of her group in progressing their community biodiversity action plan for their greening of part of the Loddon River.

Lunch finished, the group proceeded first to view a site along the Wychitella road, north of Wedderburn, that had been revegetated by the Wedderburn Conservation Management Network (WCMN). Peter Morison of DSE, one of the partner groups of the WCMN, related how the work had been done to enhance the habitat of various woodland bird species including the nationally endangered malleefowl. 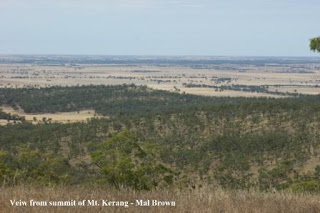 As time was passing rather quickly and deadlines had to be met the group moved to view the Australian Bush Heritage site at Mount Kerang. Bush Heritage is also a WCMN partner group. Much work has been done at this property to control pest plants and animals, monitor grazing pressure by studying exclusion plots, and the discovery of a rare species of orchid and the revegetation of the property. The views from Mount Kerang were spectacular.
An informative day enjoyed by all.