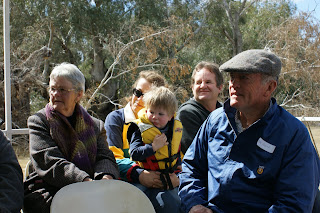 The LPLN bus trip designed to visit three iconic wetland sites within the network’s area of concern was intended primarily to be a mixture of a social and environmentally educational event held to fit in with the Naturally Loddon Festival. At 9.05 am on the 11th of September we set off up the Loddon Valley Highway with some forty assorted souls aboard a comfortable coach bound firstly for Bill Twigg’s farm – Nil Desperandum. Bill informed us as we went along that he and his wife, Gwen, had inherited the farm forty years back and that at that time it was in need of some TLC. The following years saw Bill and Gwen lavish much time and effort in improving the farm with special emphasis on environmentally friendly farm practices. The results were visible as we toured the farm. One of the jewels in the crown of their achievements is Bill’s creation of an artificial wetland from what was originally a dry flat paddock. This wetland has been created from scratch including the gathering and treatment of seeds used to create this wonderfully verdant environment.

We were also treated to a visit to Gwen’s refurbished pioneer cottage complete with fire burning in the grate and a realistic array of Australian memorabilia – an impressive effort.

After morning tea and light refreshments we set off further north towards Durham Ox and a stretch of the Serpentine Creek where the Maxted family have a fine homestead. Our host for this part of the trip was Laurie Maxted who has farmed for many years in this area. Laurie, a staunch environmentalist, regaled the group with aspects of the historical development of the area and indicated some of the thousands of trees planted on his farm. Upon arriving at the homestead half of our group boarded the Maxted punt for a cruise on the fairly sluggish water of the creek. This boat trip gave us fine views of the flora and fauna that make up the riparian habitat. Many species of birds were viewed and wondered at. A fine lunch followed – a change around of groups then we were off on the last leg of our journey.

We arrived at Tang Tang Swamp to be informed by Ian Hocking and Mal Brown that this wetland was ranked the sixth most important wetland out of four hundred in Victoria for the breeding of the endangered Brolga and one of five such aquatic ecosystems in the Loddon River catchment. The area is used by many species of birds and not surprisingly has a long history of aboriginal use. There is also evidence of early pioneer huts. Unfortunately, due to pressure of time we could not go into the swamp but managed to glimpse aspects as we drove round the perimeter.

The tour proved to be very successful with many favourable comments including, that it was informative to see successful farmers as living proof that profitable, productive, sustainable and environmentally friendly farm enterprises can result in the creation of resilient long term habitat and increasing landscape connectivity.