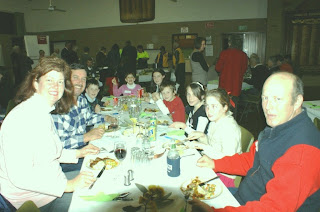 Eighty six people turned out for the Inaugural Loddon Plains Landcare Network on Saturday 4th September at the Serpentine Hall. The night was sponsored by the Inglewood and District Community branch of the Bendigo Bank. The attendees enjoyed a meal prepared by the East Loddon Lions Club and also music by Kinja. Ron Murray and Sarah James make up Kinja and provide a unique combination of indigenous Australian culture (fantastic didgeridoo playing) with Celtic singing and fiddle playing. We also heard a dreamtime story handed down by Ron’s ancestors.

It was great to see such good attendance given the difficult driving conditions due to the amount of rain that fell over the weekend. A planting day had also been planned for the Saturday, but had to be cancelled due to the weather conditions. The planting day was going to be an opportunity for city people to come out and volunteer their time to plant trees on four locations in the Loddon Shire. The planting day will be re-scheduled for 16th October.